When I first heard about cooking in the cones - I was very, very skeptical. But it works. I like to put cupcake liners in the tin, put batter in and put the cone on top. This way the cake is at the top of the cone, rather than the bottom, and you don't need to use as much frosting.

I'll show you how to make both types. 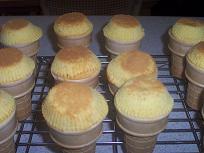 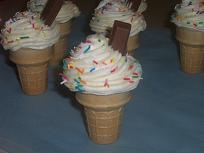 Another alternative is to make cupcakes, chocolate or vanilla, and bake as per recipe. Remove cakes from paper cases and place in ice cream waffle cones. The cakes should fit in easily or they may need to be shaped slightly to ensure a snug fit. 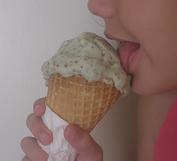 Make a quantity of buttercream frosting. You can either make all the "ice-cream" the same color or you can divide the mixture and color to resemble ice-cream flavors. I made mine resemble choc mint, so I colored the buttercream green and stirred in grated chocolate.

Frost the cupcake ice cream cones, bringing the frosting down to the top of the waffle cone. If desired, you can decorate with chopped nuts, chocolate, sprinkles or fruit. You could even try dipping in melted chocolate.

Have fun and be creative!