Do you want fries to go with your Hamburger Cupcakes?

These hamburger-shaped cupcakes are not very difficult to make but they look so effective.

Team the hamburger cupcakes up with shortbread, cut into thin fingers and dredged in sugar, and you have fries to go with your burger. These are great for teenage birthday parties. Or, make them for Dad for his birthday or Father's Day. 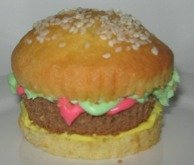