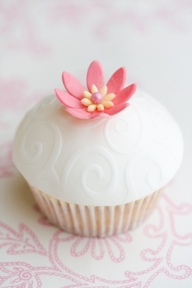 How do I make cupcakes with a "domed" top? I only see pictures of cupcakes with flat tops, but I would like to make mine with a "muffin top".

Is there something special I have to do?

Thanks so much for your question about how to achieve perfect domed cupcakes.

Lots of people think that less mixture in the cupcake tray helps give your cupcakes a domed top, however, I believe it is all in the oven temperature.

For years I was told that if my cupcakes turned out too high it was because the oven was too hot. So it makes sense that if you want to achieve domed cupcakes you need to crank up the heat.

I have played around with temperatures and find that if I preheat the oven to 400F (200C) and bake cupcakes for 5-6 minutes and then turn the temperature down to 375F (190C) the results are a nicely-rounded cupcake top.

Some people recommend heating the oven to 425F (220C) and baking cupcakes for 4 minutes before reducing the heat. I often make mini-cupcakes and I find this is too hot for this size cupcake.

Most of the time I want reasonably flat cupcake tops because I want to decorate them so I just bake as per the instructions in my recipes. However, on occasions when I want a more rounded top, I follow the instructions but just increase the temperature.

You must keep watching the cupcakes as you obviously need to reduce the overall cooking time to compensate for the increased heat. Unfortunately, this can only be done through trial and error.

There is no magic formula when it comes to cooking time vs oven temperature. You will just need to watch the first couple of batches and take them out of the oven as soon as the cupcakes are golden brown and a skewer or toothpick comes out clean or until they spring back when lightly touched with your finger.

I hope this helps.