Creme Patissiere is a rich creamy custard that is perfect for just about any cake or cupcakes.

Also called pastry cream, this is a traditional French custard that is ideal for filling cupcakes or layering cakes. It is a also popular filling for choux pastry and as a bottom layer of a fruit flan.

When a friend gave me her recipe many years ago, she told me that it is best made the day before required to allow it to cool and thicken. I have always done this but I am sure it can be made and left for several hours and used later the same day.

The pastry cream will last in the fridge for 3-4 days. If it is thoroughly cooked in the refrigerator you will need to stir or whisk the custard before use.

If you don't have vanilla beans on hand, this can be made with vanilla extract. The flavors may not be quite as intense but it will still taste great and be a lot kinder to your wallet! 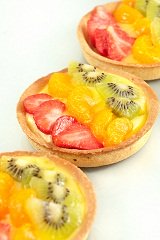