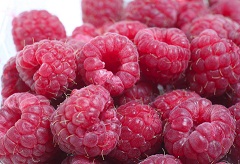 I use my favorite chocolate cake recipe, however, sometimes I have cheated and used two dark chocolate cake mixes. This is also great for an inexperienced cook as you get fantastic results without having to be an experienced chef. I get tired of seeing beautiful pictures and looking longingly at them thinking I wouldn’t get the same result!

Bake your cupcakes. If you are using cake mixes, mix up the two packets together with:

Mix ingredients together on medium speed until well blended, scrape bowl and mix for another minute.

Pour equal portions into the cake tins or spoon mixture into cupcake trays.

Cool cakes in tins for five minutes before turning onto a rack to cool completely.

For the filling, purchase a good fruitful raspberry pastry filling (H&H) is the best, place about 1 pound of the filling in a bowl and add whip cream to it (whip the cream first) now fold them together until you reach the desired flavor and thickness (don't make it too thin).

Make up chocolate buttercream and add a few drops of black raspberry extract until you reach the desired flavor.

To assemble the cake:

If making up the cake you will need to level two of the cakes which will become the bottom two layers.

Spread filling on the bottom layer and place second layer on top. Spread another layer of filling and top with rounded third cake.

Chocolate raspberry buttercream can be just spread on the top layer of the cake or it can also be spread around the sides of the completed cake. It totally depends on how sweet you want the finished cake to be.

Decorate with grated chocolate or raspberries.

Cut the cakes in half horizontally. Spread a layer of filling on the bottom layer and place the other layer on top.

Spread chocolate buttercream frosting over the top of the cupcake.

Decorate with grated chocolate or raspberries.

NB: If you are making cupcakes, you will only need half quantity of the buttercream and filling.

Miriam, thanks so much for sharing your recipe for chocolate raspberry cake.

I love the combination of chocolate and raspberry and can't wait to try it.

Join in and write your own page! It's easy to do. How? Simply click here to return to Cupcake Recipes .