These Choc Cinnamon Meringue Cupcakes are ready to eat as soon as they come out of the oven.

No need to wait for them to cool and be frosted. Great for when the children are starving and just can't wait another second.

My mom used to make these cupcakes when we were little. My brother and sisters and I always disagreed as to the best part of the cupcake and the best way to eat it. We would always carefully take the meringue off the top and some of us would eat the meringue first and the rest of us would save it till last. 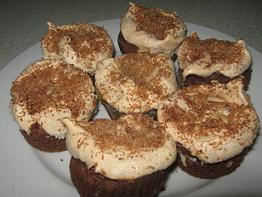